Howdy folks!  Velma here.  I know.  I know.  I haven’t been around in a while. But I’m back today to talk about  Jennie and John Brander.  Jennie was a Detroit girl, and John was born to Scotish parents in Liverpool.  And for a Michigan girl who loves Brits…this is simply fantastic!

Jennie was born Lydia Jane Densmore on 18 January 1861 in Detroit, Michigan, to Moses and Lydia Densmore.

Okay…I need to pause just a minute to say that as a Jane Austen fan…how awesome is her name?!  Lydia Jane!  YES!

Anywho…the lovely Jennie was born two months before Abraham Lincoln was inaugurated, and three months before the Civil War broke out.  Her father, Moses Densmore (or possibly Dinsmore/Dinsmoor as you know people in the old times weren’t sticklers for consistent spelling), was born in New Hampshire in 1814.  He married Lydia “Liddie”  Allard on 2 July 1843 in Bolton, Ontario, Canada. Lydia Allard was born 15 August 1820 in New Hampshire to Henry Allard and Mary Elizabeth Fall Allard. I can confirm that they had 6 children:  Laura Ann, Caroline, Phoebe, Moses, and our dear Lydia Jane.  But I have seen a fellow researcher post and additional  4 children:  John, twins Amanda and Maranda, and James M.

John was born John Charles Brander on 31 August 1848 in

Liverpool, Lancashire, England to Colin George Brander and Agnes Fraser Brander.  Queen Victoria had been reigning in England for 29 years when John Charles was born, and continued to do so until 1901.  His father Colin was born 1 June 1813 in Auldearn, Nairnshire, Scotland to James Brander and Christian Munro Brander.  His mother, Agnes Fraser, was born 27 June 1816 to William Fraser and Jean Mitchel Fraser.  She was christened on 5 July 1816 in St. Andrews/St. Leonards in Fife, Scotland.  Colin and Agnes were married 12 February 1836 in St Cuthberts Church in North Leith (Edinburgh), Scotland.  They had 5 children James, Jane, Christeina, Agnes, and John.  Sadly Agnes died when John was only 1 year old in September 1849.

John Charles left England on the William  Penn.  He arrived in New York, New York on 24 November 1868.  He was 20 years old.  He then made his way to Detroit, Michigan.  His father, Colin, wasn’t on the same ship as John, so I’m not sure if he came first or later.  But I found them them both listed in the Charles F. Clark & Co’s annual directory of the City of Detroit for 1871-1872.  They are listed as owners of C.G. Brander & Son.  They were liquor dealers.  They lived and worked out of 20 Grand River Blvd.  In the Hubbell & Weeks Annual Directory of the City of Detroit for 1872, and J.W. Weeks & Co’s Detroit Directory for 1873-74 and 1874-75, they are listed as having a saloon at 20 Grand River, and still living there too.  But on the Detroit City Directory for 1885, Colin is listed as a capitalist living at 295 Harrison Avenue.

Family tales say that John Charles was an artist and was one of the artists who painted the interior murals and decor in the Fox Theatre in Detroit.  I have yet to figure out how to verify this, but that’s what the family says.

Jennie had a job working in a seed store per the 1880 Census.  Sadly for me, I don’t know much more about her than that.  I do have pictures though.  And you know I love those!!

Jennie and John in the late 1920’s in Detroit

I wish I knew how they met or what drew Jennie and John together…but alas the documents I have leave all the fun and juicy bits out.  But I do know that they were married in Detroit, Michigan on 28 December 1882.  They went on to have 7 children; Lydia May, Anna Victoria, Agnes Etta, Emma Florence, Margery Jean (my great-great grandmother), William Charles, and Carolina.

Their love story may be a mystery but I do know that Jennie died 22 January 1930 and John followed within a few days.  They were buried together in Woodmere Cemetery after 47 years of marriage.  This brings tears to my eyes as my Nana, Janice, Jennie’s great-granddaughter, died 11 March 2016, and her husband of 61 years, Harvey, followed 19 days later. 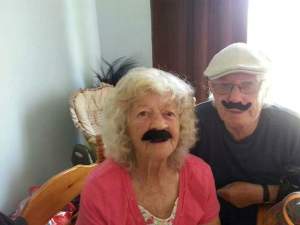 I guess after so many years of two being one…to live without the other was just too much.

This is one of my favorite pictures of my grandparents.  It shows their silly side.  I miss them.  Every day.

Join us next time when I try to hash out the mystery of the Allards…or maybe the Densmores.  We’ll have to see.  XO Velma