I am in love with Clark Kent. I have an affinity for regular humans who look like him or have his character traits.

I wish I could go swimming right now but the pool closes at 8 pm and doesn’t open until 10 am tomorrow. Lame. I know.

I wish I were braver.

I’d like to be kind and blunt at the same time, and always tell people what I see when I look at them. I don’t mean “I like your shoes” or “He’s so hot.”

But to really say something they need to hear, “Don’t wear dresses that short. You are worth more than that. You are selling yourself short and cheapening yourself. And people are mocking you.”

“Why are you dating someone who doesn’t value you? Who dismisses you and your opinion?”

“Don’t you know that you are the joy set before Jesus, that made Him certain that crucifixion was completely worth it?”
I love my people but I can’t imagine heading into crucifixion with joy. 🤤 That astounds me.

Point to ponder while you wander…people are usually aware of their flaws, but not what makes them wonderful.

So next time you tell someone you love them. Tell them why. Or compliment who they are as a person.

Fun Fact Friday: Happy as a Clam at High Tide

​Ever wonder what “happy as a clam” meant?  Me either.  But I found the meaning and I’m sharing it just incase you did ever wonder.  Because that’s what I do.  I answer questions that no one asks.  😉

The full expression is “Happy as a clam at high tide.” At high tide, they’re safely covered in water.  They are blissful, or the closest clams can be to happiness, I would imagine.  But at low tide, people (& critters I would suppose) go clam digging.  Then they are no longer happy & blissful clams.
Consider your unasked question answered.  😚

Point to ponder while you wander…Joy of the Lord is strength. Joy keeps you strong even when you aren’t situationally  happy as a clam.

We all know tow-head means a kiddo with light blonde hair, but have you ever wondered where does that expression come from?

2. Back in the day, families grew their own flax to make their own clothing and ropes. The process of turning flax into thread was a tedious process. But since they were without malls and on-line  shopping in Colonial days, what option did they have?

The flax would be harvested, and soaked in water for several days to soften it. Then the inner fibers would need to be removed from the stalk. (Whomever figured out how to make clothes from plants is seriously brilliant.) The flax would be pulled through a bed of nails or combed in a process called towing. The short fibers that were removed were called tow. People who had hair that resembled this tow were called tow-heads.

I think a brother started it, intending to insult his little sister, but eventually it became an endearing way to describe adorable little curly heades, blondies like my niece.

In case you are one of those truly curious people, here’s why most tow-heads end up with dark hair.

6 reasons why I am thankful for rainy days in the summertime. 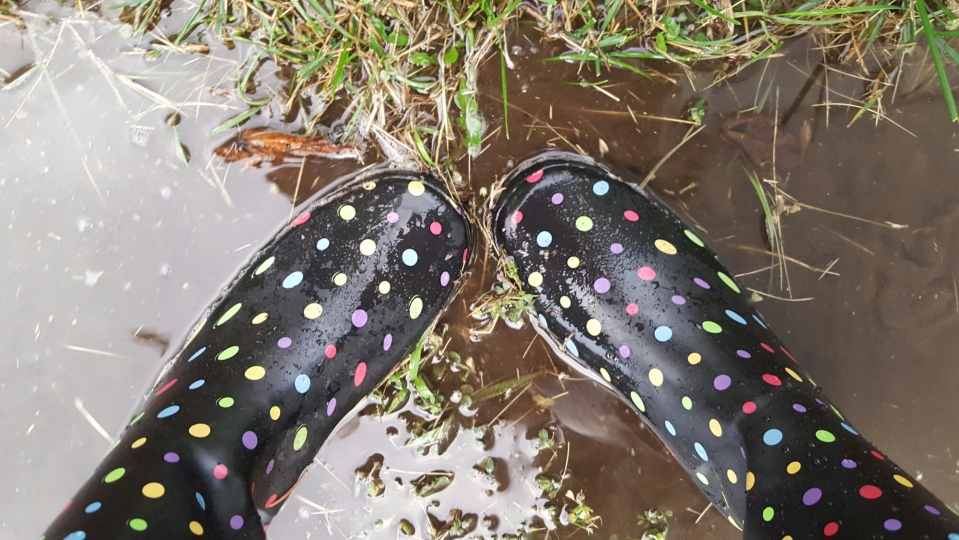 2. My inner 7 year old gets to gleefully splash in the puddles.

3. I get to dance in the rain. For maximum enjoyment, I highly recommend looking up and feeling the rain on your face while you twirl.

4. My grass turns bright summer green and my flowers get watered.

5. The possibility of a rainbow. Who doesn’t love a rainbow?

6. Blue-skied, sunshine-filled days always pressure me to go and DO something. Rainy days let me BE. If I want to read all day in an over-stuffed chair. Rainy days will not judge me.

Something to ponder from under your umbrella…”Those who believe only the sunshine can bring happiness have never danced in the rain.” – Unknown

Having one of those nights where my brain just will not shut off, so I got out of bed and turned some worship music on & started making the fruit salad I need to make for a family event today.

As I was making my favorite kind of salad, I was thanking God for all the brightly colored, interesting textured, flavorful fruit. What a blessing it is to have access to so many kinds of fruit!