If you’ve read much of my blog you know that I am a fan of etymology.  And in that vein my curiosity was piqued about Cheeky Monkey?  Like what in the world?  Cheeky Monkey?

Cheeky is defined in the 1859 dictionary as an adjective, “from cheek, in it’s sense of insolence.”

It’s generally used when someone is mouthy or speaks their mind too easily.  My mom used to call it “lip” rather than cheek, but you get the idea. Cheeky is generally thought of as a British term, and that’s probably true. I don’t hear it in my neck of the woods.

CHEEKY (1859), impudent, insolent, saucy derives from CHEEK (1823), verbal insolence, audacity, impudence, effrontery, brass, chutzpa and was originally considered slang but now is Standard English. “If he gives me any cheek, I’ll knock him down”—George Moore, 1884. The term is metaphorical and has been associated with the cheeks when speaking to or facing someone with confidence. ‘Lip,’ ‘face,’ ‘jaw’ and ‘chin’ have been used similarly. The expression often appears in the form ‘to have the cheek to’ (also ‘to have the face’) to dare, to have the nerve to do something.

So what is a cheeky monkey?

Cheeky monkey is can mean an impudent person, but in most definitions I found it was referred to as what a woman says in response to a man’s flirtation and what not, especially if he’s over eager.  Urban dictionary says, “Term used to define sexual our witty comment made in jest. Cheeky means you are flippant, have too much lip or are a bit of a smart butt! Generally you are considered to be a bit cheeky if you have an answer for everything and always have the last word.”

Sometimes parents use this as a term of annoyed endearment when their kids are being saucy and sassy, like the little guy pictured below. 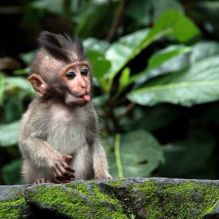 Photo found on Pinterest, no photographer listed to credit.

My favorite definition was found it the open dictionary, said, “Used for telling someone that they are not showing respect when you are not really angry.”

Used with a tsk tsk or shaking of the head and a wink I am sure. 😉

Point to ponder while you wander…Tongue in cheek means that something shouldn’t be taken seriously or that it was meant in jest.  It’s characterized by either insincerity or exaggeration.  I’m sensing that cheeky monkey is to be used in that same vein.

By Jillbeingstill in Fun Fact Friday, Random on October 14, 2016.
← The Cabin Mysteries and Family History: Densmores End Up In Detroit →